Like many golf lovers I know, I share a love of the game with my Dad and while I don’t get to hit the fairways with him as often as either of us would like, many of the best courses I have ticked off my bucket list have been with the old man at my side.

The likes of Turnberry, Royal Porthcawl in Wales and the European Club just south of Dublin have been particular highlights of our golfing adventures throughout the years and while on a long car journey about a year ago, the conversation, as ever, inevitably turned to golf.

The Ailsa Course at Turnberry

“How do we top the courses we’ve already played?”

A once in a lifetime trip to The Masters was an idea floated by my Dad.

Not a bad start to the brain-storming!

However while one day we WILL make it to Augusta National together, as time ticks on I am becoming more and more aware, at the ripe old age of 30, that we should be PLAYING golf rather than watching it on our golf holidays together.

I’m not saying my old man is ready for a zimmer frame just yet but eventually battling our way around a string of world class links courses (a tiring feat for even a young buck if the elements are ganging up on you!) on a whirlwind golf tour just won’t be doable…and that’s when Augusta and a trip to The Masters will come in handy! 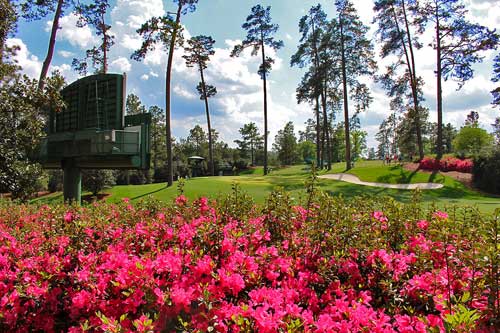 Augusta will have to wait…

For now, I decided a trip to the South West coast of Ireland – my Dad has for years talked about how “one day” we’ll play at Ballybunion together – would be more in order.

Now…that particular stretch of coastline is chock full of world class links courses, and there are some of the most picturesque inland courses imaginable awaiting at the likes of Killarney Golf & Fishing Club too, so deciding on an exact itinerary wasn’t the easiest task!

Obviously Ballybunion was the 1st course on the list but in 7 days, we were aiming for at least 4 courses in total. The search was on for three more…

Driving is obviously an issue down in this part of Ireland. The roads are commonly of the single track variety and while the scenery along the Wold Atlantic Way is simply stunning, you don’t want to spend too much of your trip in the car…there’s Guinness to be sipped! So the remaining three courses would ideally be within a manageable drive of The Ballybunion Golf Hotel; our base for the 1st few days of the golf tour.

Ballybunion Golf Club is just a 5 minute drive from the hotel, so after arriving in plenty of time and deciding on the format for the week, our 1st Ireland Tour tee shots were about to be struck in anger.

The 15th at Ballybunion

It’s a gentle start at Ballybunion and after a handful of holes, you’d be forgiven for wondering where the course’s enviable reputation comes from. However after picking up a drink and a hotdog in the refreshments hut near the 6th tee, all is about to be revealed.

The 7th tee is perched right at the ocean’s edge and as you figure out which green the pin’s on (yes there are two separate greens here which the club alternate between!) you get a sense of things to come. From here on in the course is really special…

Tom Watson said of the course, “After playing Ballybunion for the first time, a man would think that the game of golf originated here. There is a wild look to the place, the long grass covering the dunes that pitch and roll throughout the course making it very intimidating…in short, it is a course on which many golf architects should live and play before they build golf courses. I consider it a true test of golf.”

This sums Ballybunion’s Old Course up quite nicely. Besides…who am I to argue with a 5-time Open Champion?

Once rested after our round at Ballybunion, we gathered at the lower end of the town, near the beach, and settled on a lovely looking pub called McMunn’s for our first evening meal of the tour; a decision we wouldn’t regret.

McMunn’s was the liveliest pub in town which, needless to say, is often a good sign! There were plenty of golfers in there too, presumably on similar trips to our own; golfers we’d come to spot in and about town, as well as on the golf courses over the course of the week.

In fact, we never strayed from McMunn’s for dinner during the time we were based in Ballybunion. The food was exceptional, with freshly caught seafood and thick cut Irish steaks both to die for. The atmosphere was buzzing too, with live music kicking off after dinner each night, providing the perfect soundtrack while we indulged in a few pints of Guinness.

We spent the second half of our trip in the town of Lahinch but before leaving Ballybunion and McMunn’s behind, there was the small matter of a game of golf at Tralee Golf Club which was just a 40 minute drive to the south.

The 17th at Tralee

In all honesty, Tralee was added to the tour mostly for its convenience, only being a 40 minute drive to the south of our hotel, rather than the 2 hours it would’ve taken to reach Waterville Golf Links, but it turned out to be everyone’s favourite course. It actually became my favourite course in the world. 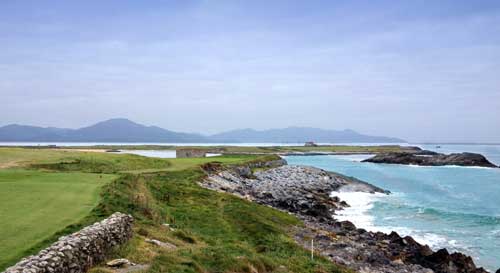 The 3rd at Tralee

“I have never come across a piece of land so ideally suited for the building of a golf course,” said Arnold Palmer of Tralee. It is easy to see why. Palmer also said of the course that, while he designed the front nine, “surely God designed the back nine,” and as you make your way through the vast dunes, you certainly come to understand what he meant. There’s only one word to sum up this stretch of holes: epic.

It was with a heavy heart that we packed up the car and made our way out of Ballybunion, but the promise of more amazing links golf and a few more days of over indulgence in the surfer’s haven of Lahinch softened the blow.

Geographically speaking, Lahinch isn’t all that far from Ballybunion but with the Shannon Estuary in the way, the drive from one to another takes around 2 hours.

We had our best day’s weather when we played at Lahinch Golf Club. In truth we were extremely lucky with the weather all week long, with not a single drop of rain falling for the entire trip!

The 8th at Lahinch

A shot-maker’s haven, Lahinch requires golfers to employ their creativity to combat awkward stances created by the endlessly rippling links land. Discipline, patience, and perseverance are required to combat patches of heather and gorse, and although they are not every golfer’s cup of tea, the blind shots here, of which there are a few, add to the challenge too.

Doonbeg, now named Trump International Golf Links Ireland of course, would be the scene of our final round. 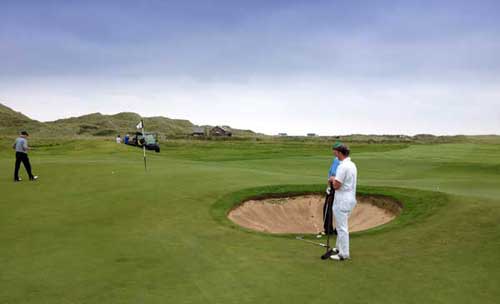 Watch out for the bunker in the middle of the 12th green at Doonbeg!

From Lahinch, it was a little over half an hour’s drive until we saw the impressive Trump International Clubhouse in the distance. The one thing that immediately set this place apart from the others was the country club-like service you get from the moment you arrive. That’s not to say the service at Ballybunion, Tralee and Lahinch wasn’t good, it was, but this was exemplary.

The course is a fine one too, with the amazing 1st hole setting the tone for the rest of the course. A long, narrow par 5 with the ocean on the left, this hole is most memorable thanks to the enormous dunes that surround the green, creating an amphitheatre effect. The 18th at Trump International is a great hole too and was a fitting end to a marvellous week’s golf, as was the steak lunch I had in the clubhouse.